Baklin: Jewel of the Seas 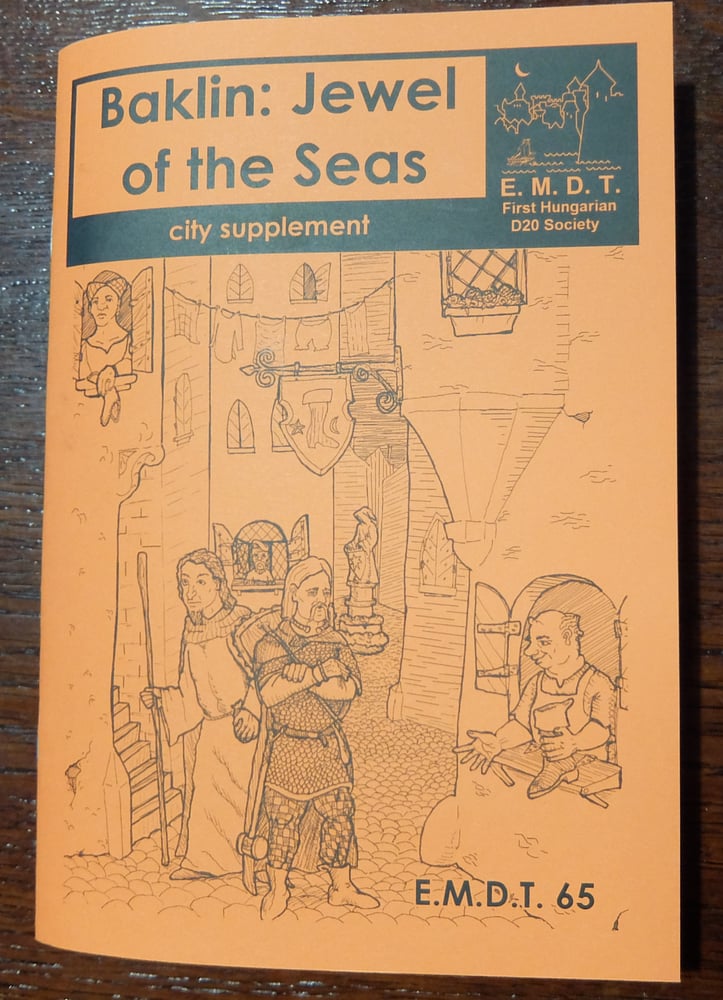 A 72-page setting guide and adventure module for low to mid-level player characters, Baklin: Jewel of the Seas describes a medium-sized merchant city, including its rulers, criminal underworld, establishments, and three-level Undercity. Baklin is meant as both a campaign hub a party can depart from and return to (with numerous hooks for wilderness adventures), and as a complex adventure location of its own. It can be used along with the materials published for the Isle of Erillion mini-setting (Echoes #02–05), or it can double as almost any neutral-aligned port town in your own setting.

In any case, Baklin is meant to be played: it is focused on city intrigue, exploration, and dungeon crawling. Go shopping for great deals in port or at the stores of the reclusive Masters’ Guild; be careful not to fall afoul of the Sea Laws or anger the Knights of Yolanthus Kar; discover what lurks in the Tower of Gulls; and brave the Shrine of Roxana and the Thrones of Judgement!

This is two identical-length modules in one: a city guide with 39 major locations and a dungeon setting with 112 keyed areas, connected and bound together via multiple secret entrances, plot threads, and NPC agendas.

“Oh Baklin, Jewel of the Seas, great gateway of Erillion! Minstrels sing of its wealth and marine power; and of the refinement and taste of its magnates and nobility. Minstrels of all kinds, of course, are prone to grandiloquence; and perhaps Baklin is neither as mighty nor as fair as the ballads claim. And yet, there is reason the minstrels sing so, for Baklin has wealthy patrons, its fleet is not inconsiderable – and are its streets not the loveliest within so many weeks of travel? Indeed, those who brave the high seas often believe so… and they will gladly pay for a song to remember their visit. This booklet presents a complete city supplements describing the streets, personalities, and conflicts of a bustling port town, from the heights of power to the deepest undercellars. In Baklin, all streets lead to adventure – and a single life would not be enough to complete all of them.”

This supplement has been illustrated by Denis McCarthy (who also did the cover), Stefan Poag, Graphite Prime, Jerry Boucher, and the Dead Victorians.

Please note that your print order also makes you eligible for free PDF copies of your ordered items when they become available (should be three months after the print edition). PDFs will be delivered via DriveThruRPG to your regular e-mail address, unless you request otherwise.