Trail of the Sea Demon 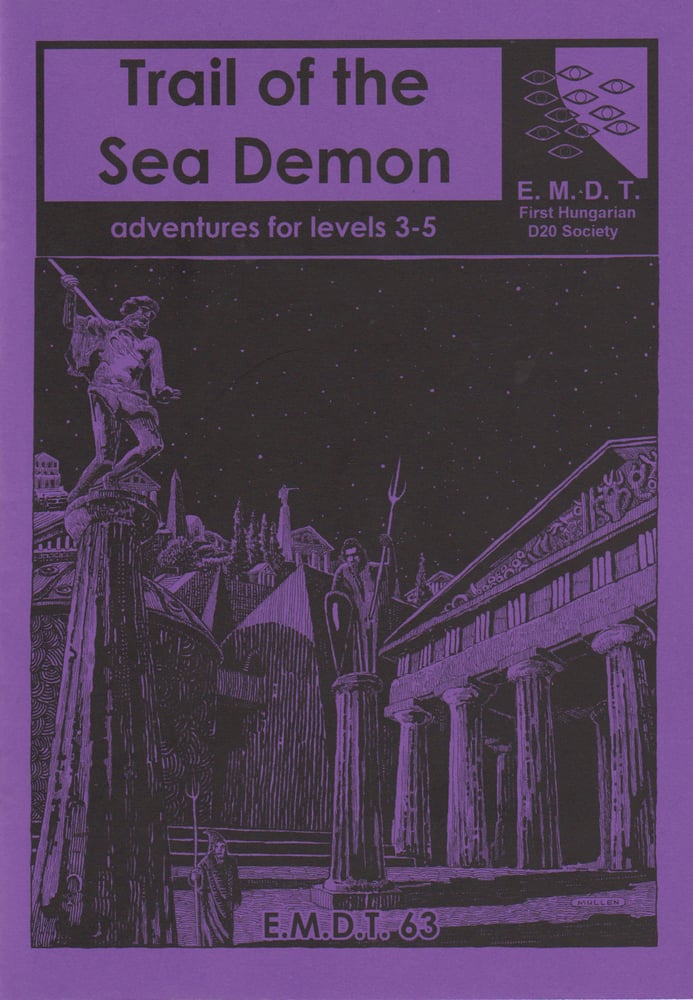 Trail of the Sea Demon is a 32-page collection of three loosely connected weird fantasy scenarios for 3rd to 5th level characters. These mini-adventures revolve around a secretive mystery-religion, and the hidden paths which lead to it in a fantastic, labyrinthine city. They can be inserted into any gloomy fantasy metropolis, and may be smoothly integrated into an ongoing campaign. The three scenarios are:
* The House of Rogat Demazien: The mysterious sculptor and magician is out of town, and his house lies unguarded. What treasures and dangers are to be found in the Beggars’ Quarter, and where does it all lead to? 37 keyed areas.
* Temple of the Sea Demon: Hidden somewhere in the city, a strange temple awaits. Who will outwit the secretive priests and magical guardians to claim its treasures, and who will risk the wrath of the Sea Demon doing so? 19 keyed areas.
* Shadow Court: a true bazaar of the bizarre where shadowy merchants mingle with those looking for exotic wares – and deceit lurks around every corner. Yet why does nobody here speak of the abandoned garden shrine and its nightly visitors? 20 keyed areas, and the strange merchants of Shadow Court are revealed in this module!

“The Temple has stood in an abandoned plaza since time immemorial. It is part of the city, but no known street or alleyway leads to it. Only those who wait for the appointed time can embark on a pilgrimage of shadows and dreams to walk new ways through the silent and dark city. It is said that only a select few know the way except for the fanatical priests who worship the destructive powers of the sea. Those who have sought the Sea Demon’s advice seek it rarely; those who seek its riches have never returned to tell the tale. But now, the city’s past may grant a key to solve an occult mystery… Trail of the Sea Demon is a collection of three short adventures concerning the way to the Sea Demon’s sinister temple, the secrets and perils that await therein, and what may follow afterwards.”

Originally published in Fight On! magazine, these adventures have been revised and expanded based on further play, and presented in an accessible, user-friendly format in the current edition, with new illustrations by Peter Mullen (whose cover is one for the ages), Graphite Prime, Jerry Boucher, and Stefan Poag.

Please note that your print order also makes you eligible for free PDF copies of your ordered items when they become available (should be three months after the print edition). PDFs will be delivered via DriveThruRPG to your regular e-mail address, unless you request otherwise.